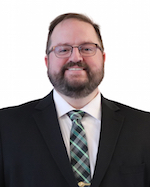 Tom Assel, GPC, is the Vice-President and a Senior Writer with Assel Grant Services since 2012. He provides administrative and technology support for the consultancy, in addition to grant research, proposal writing, and editing. Tom earned the Grant Professional Certification (GPC) in March of 2016 from the Grant Professionals Certification Institute. Tom has successfully raised nearly $4 million in grant funding since 2014.

He graduated summa cum laude from the University of Missouri, Kansas City with a Bachelor of Science in Electrical and Computer Engineering, and received his Master’s of Science in Electrical Engineering at the same institution.  His graduate studies focused on software development.  He worked for Garmin as a software engineer in their Marine Electronic department for two years, after which he began working full time for Assel Grant Services.  Tom has successfully written grants in a broad range of fields including performing arts, youth advocacy and development, developmental disability services, family services, athletics, and others.  He has assisted on federal grant projects for small businesses and educational institutions.  Tom is a member of both the Eta Kappa Nu and Tau Beta Pi honors societies. Tom served in the Marine Corps from 2000 to 2005, including a combat tour in western Iraq in 2004.